Author: Caitlin Hanbury
"VCU is a place that needs fruitful connections and idea exchange to happen freely, and I see MATX as just such an opportunity.” 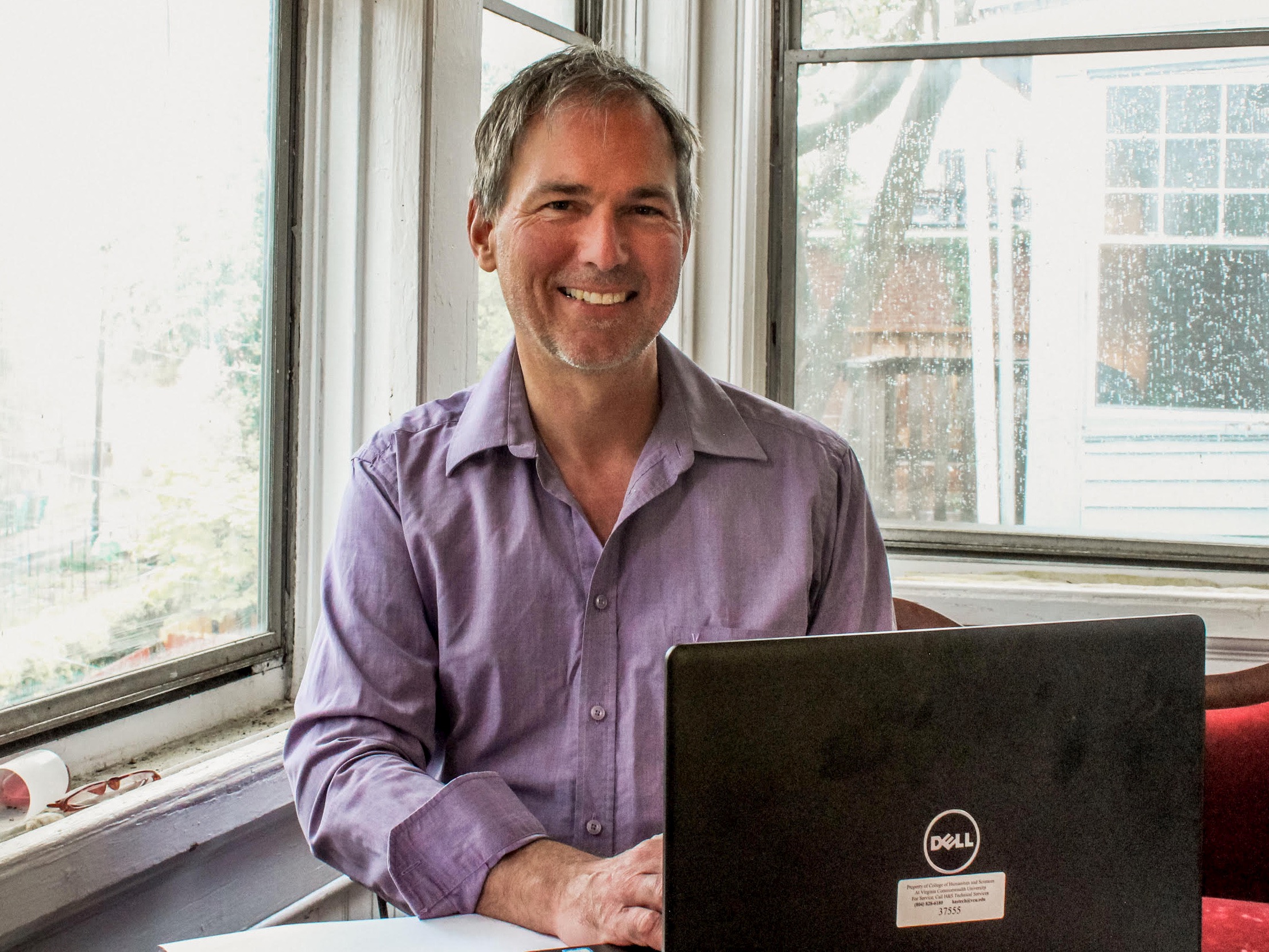 A film screening as an undergrad changed the educational journey of Oliver Speck, Ph.D., associate professor of film studies in the School of World Studies and the director of the Media, Art and Text (MATX) interdisciplinary doctoral program. “Many years ago, I saw ‘Blue Velvet’ by David Lynch (1986) with my friends. I was the only one who loved the film and, trying to convince my friends, I started to think about film as multilayered text.” That shift in interest led to a double major in German literature and history, and later graduate studies focusing on film and narratology. He finished with a doctorate in German language and literature from University of Mannheim in Mannheim, Germany. Funnily enough, Oliver’s cinematic journey came full circle when he took his first teaching position in the United States at University of North Carolina Wilmington. “My first full-time job in the U.S. took me to Wilmington, NC, where [‘Blue Velvet’] was shot. We lived just blocks away from many of the locations.”

Since that time, Oliver has cemented his expertise in film studies, especially Austrian cinema, with the publication of two books—"Funny Frames: The Filmic Concepts of Michael Haneke” and “New Austrian Film.” His more recent research deals with representations of slavery in cinema. His latest book project examines “Birth of a Nation,” the 1915 film by D.W. Griffith. “[The film] puts in place narrative conventions of filmic realism and, as I argue, a racist dialectic of absolute possession. Especially in older movies, slaves are depicted as possessed by natural impulses that would render them as slaves to their passions, were they set free.” Oliver explains that this project grew out of a fruitful collaboration with peers from across the College of Humanities and Sciences. In fact, along with colleagues from the departments of history and English, this group of faculty, which includes Oliver, was granted a residential fellowship with the Humanities Research Center to explore their topic “Cultures of Captivity.”

“Our [MATX] students thus work across and between disciplines and media and learn to use quantitative and qualitative methods to study intersections of what are normally distinct disciplines."

In spring 2019, Oliver assumed the role of director of the Media, Art and Text interdisciplinary doctoral program, a joint endeavor of the Department of English, the School of the Arts, and the Robertson School of Media and Culture. “Our students thus work across and between disciplines and media and learn to use quantitative and qualitative methods to study intersections of what are normally distinct disciplines. Much more than a traditional program in comparative literature, our students think holistically, looking, for example, at the aesthetic side of mass media, or at the historic, while also learning some quantitative methods of analysis that are highly sought in the job marketplace, both within and outside academia.” Oliver sees the MATX program as a sign of the sort of healthy connections made in a university community. “I really care about the vision and mission of the MATX degree. I also value any opportunity to connect with colleagues outside of my department. VCU is a place that needs fruitful connections and idea exchange to happen freely, and I see MATX as just such an opportunity.”

As director of the program, Oliver is acutely sensitive to successful job placement for MATX graduates. With a curriculum that emphasizes interdisciplinarity, he wants students to feel empowered by their distinctive background and skills. “Most jobs, those in academia and those in the industry, are unfortunately still closely defined by traditional disciplines. I believe that our graduates have a unique skillset that can be very valuable in dynamic environments.”

Even with the full load of responsibilities associated with directing the MATX program, Oliver continues to enjoy his work in the classroom with students. “I am co-teaching a class on space in film this semester, and you can tell a lot about the quality of a movie by looking closely at the way the film handles space.” The class has illuminated for students how camera direction, shot perspective and set can advance the plot in a more holistic or nuanced way.

So, what’s one movie that you won’t see in Oliver’s viewing queue? “The Avengers movies stand for everything that is wrong with contemporary cinema,” says Oliver. “I’m with Martin Scorsese on that one: this is not cinema! Counting Cotton Candy as ‘food’ does not make much sense, either. This brings me to my guilty pleasures: in seventies and eighties action flicks, at least there is an admirable dedication to craftsmanship.”